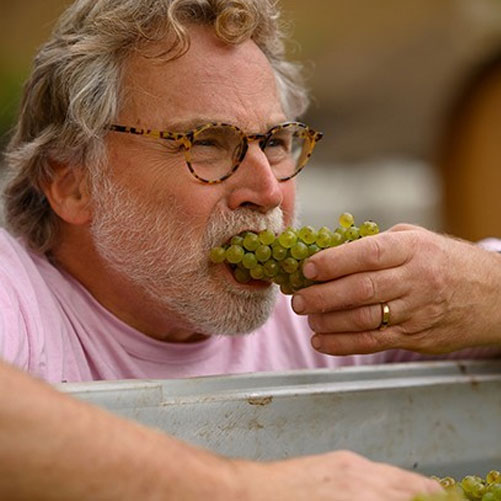 As our exploration of Oregon wine continues, we are so excited to share our kitchen with St. Innocent Winery’s Mark Vlossak. 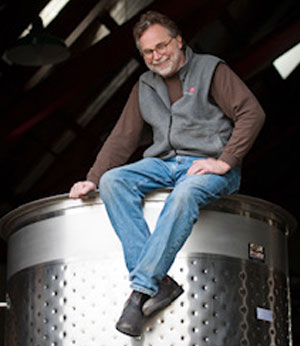 Mark Vlossak grew up tasting wine at the side of his father, who imported fine wine on the side for a group of buddies in a wine club (the container truck would pull up to the house in Wisconsin once a year and all these guys would unload the wine, distribute it among themselves, and throw a party). After a postgraduate degree in medicine, he moved to Oregon to practice pediatrics. In 1983, he re-discovered his passion for wine, which led to school at UC Davis as well as a two-year apprenticeship at Oregon’s Arterberry Winery. In 1988, he founded St. Innocent Winery, named for his father, who was born on All Innocent’s Day and christened with the middle name of Innocent.

In 2007 he moved out of the tiny winery he had built in an industrial park in Salem (a practical place without a shred of romance) to a state-of-the-art facility deep in the Eola-Amity Hills. It was called Zenith Vineyards, and St. Innocent bought an interest in this LLC during its conceptual phase, allowing Mark to design the cellar from start to finish. In 2017, wishing to be unencumbered by partners, he sold his share in Zenith and bought a small property in the south Salem hills. There, with the help of a friend, the viticulturist Mimi Casteel, he planted a vineyard, plus an apple orchard, and built a new winery.

He’s come full circle back to owning his own place, with the enormous plus of having a vineyard. He planted it one vine at a time via a drilled hole, all 15.5 acres—without earth-moving equipment, bulldozing, or grading, meaning that virtually none of the soil and its microbial life was exposed to light or oxygen—and made the parcels organic from the start (now he’s talking with Moe Momtazi to determine biodynamic preparations). In the process, he’s downsized his production by nearly 40%. His focus remains on Pinot Noir—it comprises some 70% of what he makes—from the Freedom Hill, Momtazi, Shea and Temperance vineyards. In addition, there’s a bit of Chardonnay and Pinot Blanc.

St. Innocent believes Pinot noir is uniquely capable of capturing a sense of the place it is grown, the charactor of the vintage, and its gift of pairing with a wide variety of food. Philosophically, they look both to the New and Old World for inspiration. They believe that each decision, from bloom to bottling, expresses itself in a wine. Their job is to make choices that reveal those details.

To accomplish this, their winemaker oversees all stages of the wine’s evolution: the management of the grapes through their final ripening, the way the grapes are extracted during fermentation, and the maturation during aging. Small decisions move the young wine in the desired direction and each wine has distinct textural details and flavors that reveal its unique story. All of these are based on tasting the grapes and then the wine as it moves through its life form vine to bottle.

Register for our newsletter!

This event requires a table reservation.

PLEASE SELECT THE NUMBER OF TABLES you need for your party in the "Options" box on the event page.

P.S. For per-person pricing and table descriptions, scroll down to REGISTRATION INFORMATION on the event page.